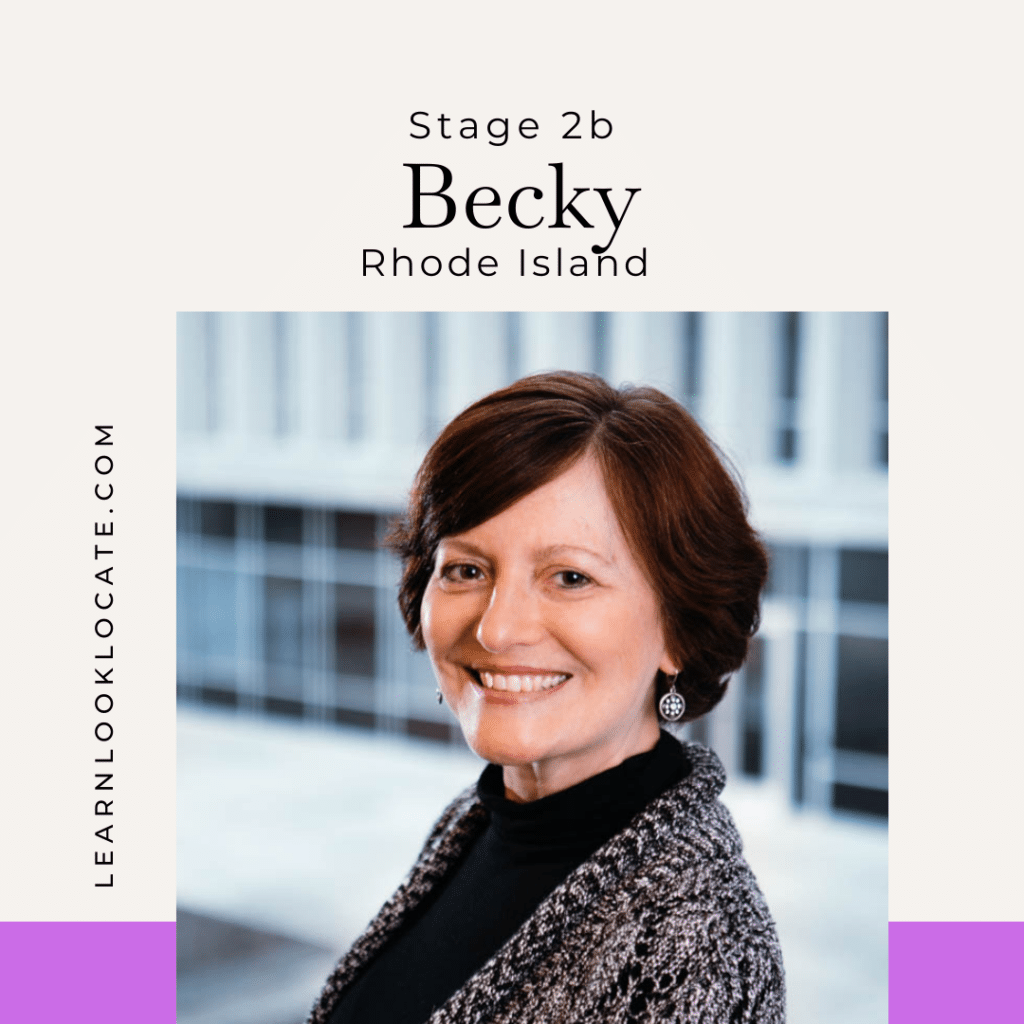 At the age of 45 I was diagnosed with stage 2 B invasive ductal carcinoma. I had 4  cancerous tumors and a 4 cm area of DCIS, all undetectable at my annual mammogram.  I had felt the lumps in December of 2012 and was shocked when the radiologist sent me  the “all clear” letter that same month. At the time, I had 2 young boys ages 5 and 9 and  was a busy working mom. I’d sit on the couch at night and my hand would immediately  scan the area of the lumps, obsessively, repetitiously feeling them, wondering if I was  imagining things. Were they getting bigger? Why were they so painful? And why did my  nipple on that side also look strange, as if it was looking off to the side? In my gut, I  knew something was wrong, but I kept rationalizing that the mammogram came back  clear, so I must be fine, right? Also, I had been a breastfeeding mom and my breasts  changed quite a bit. (I have to say, I felt like I no longer knew them and didn’t know what  normal was supposed to feel like anymore.)
I couldn’t accept that things were “Ok”, even with the “all clear”. A few months passed  and I finally reached out to my ObGyn. She felt the lumps, too and immediately ordered  an ultrasound. In the middle of dentist appointments for the kids and rushing around, I  got home after 5:30 pm and my phone was ringing. It was my doctor telling me they had  found a “suspicious mass”. From there, my life went blurry. Although I was not  surprised, I was now living in a state of hysteria.
I first had a lumpectomy, where they discovered the 4 cm area of DCIS outside the  margin. My oncologist recommended that I have radiation to destroy this cancer and then  suggested some form of reconstruction. At this stage, my breast was half gone (technically he had already given me a partial mastectomy) and after consulting with a  radiation oncologist and plastic surgeon, I opted for a double mastectomy. (On a side  note, my oncologist at the time tried to discourage me and said, “There is something to be  said for the natural state of a woman’s breast”. Yes, he said this to a cancer patient trying  to save her life. I didn’t want to make this choice but having 2 aunts on my mom’s side  dying from breast cancer and my complete mistrust in mammography, I was super fearful  for my other breast. My breast surgeon told me I had a 25% chance of getting it on the  other side. The double mastectomy was the only solution for me.
I was not given choices around reconstruction. I was sent on a fast track to implants after  expanders. I had 4 rounds of chemo and 7 years of Tamoxifen, due to my cancer being  estrogen receptor positive. I lost my hair, I battled with weight gain, depression, anxiety,  PTSD and continued fears that this will return. My family also suffered along with me  and this is something people don’t often realize, the collateral damage of breast cancer.
The reconstruction was a long and painful process and if I could do things differently  now, I would. I wish doctors would be more honest with us and tell us that while we may  look normal to the outside world after recon, there will be no feeling except for the  constant feeling of having 18 bras strapped around your chest 24/7. Somedays, I wish I  could rip them out and just be free but I’m too scared of the next emotional trauma that  might bring.
I was dismayed and disappointed (still am), in the medical system and the lack of  standard of care around women with dense breasts. At the time, there were no “Dense  breast notification acts” pioneered by the late and great Dr. Nancy Cappello shortly after  my diagnosis, whereby women are required to be notified of their breast density I many  states. I got a hold of my medical records from the years prior to my diagnosis and each  letter from the radiologist sent to my doctors stated the same thing:
“Rebecca has extremely dense breasts”
At no point did my doctor pursue further testing for me or educate me around the risks  and ramification of having dense breasts (50% of cancerous tumors go undetected in  those with dense breasts). Even though many states have the Dense Breast Notification  Act, women are still being dismissed and not educated enough about this letter.
We feel like we are climbing an uphill battle, still, after so many years. We should be  doing better and we CAN do better. And how can we? It starts with YOU. You have the  power to be educated, to speak up and to continue to advocate for yourself because that is  the only way YOU will get what YOU need.
I am thankful that I had a doctor who was educated around this topic and actually took it  seriously in 2013. I owe my life to her! Thank you, Dr. Manning!
Cancer is awful and I’ve lost so many friends and family members to this disease. I write  this with a grateful heart and a passion for educating all men and women because no one  ever thinks they will get this disease. But the hard reality is that you likely know someone  in your circle who has had it or will have it. Be vigilant when it comes to your health and  your breast health! No one will advocate for you more than you can.
admin2022-09-27T23:49:43-04:00