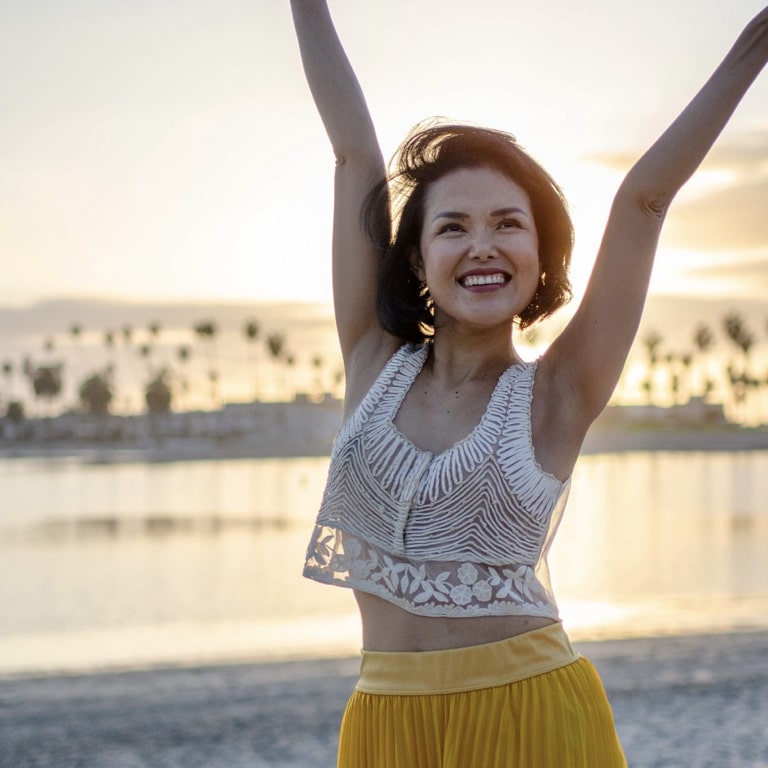 “It all started in the shower. I accidentally felt a lump the size of a marble with a gummy like texture while I was lathering my left breast with body wash. I never had that lump before, as far as I remembered. So I looked up a women’s reproductive health center online that’s close to my area and booked for a consultation just to have the lump checked.”

From that consultation, one thing led to the other. From physical exams, I was referred to a breast specialist who then ordered a mammogram and ultrasound then eventually led to a biopsy. And from there, I got my initial diagnosis of stage 2A ER+ HER2-. This is in October 2016.

I was extremely shocked and sad to receive the news because I was just new to San Diego working in the hotel industry. I was only 36 back then and at the prime of my life. I was also on my own and far away from my family who are in the Philippines. I was active, ate healthy most of the time and had a great social life so it all just didn’t make sense to me and it took me a while to accept that I had this diagnosis.

For the whole year of 2017, I did chemotherapy, lumpectomy surgery, radiation and hormone treatment. I had to stop work, focus on my healing, and dealt with depression from the hair loss and other unpleasant side effects from the brutal treatments. I started to document my journey on social media as a therapeutic release and coined the artist name “Jaymee WINS” as a self-reminder that no matter what happens, I will choose to win over life’s daily struggles while going through a cancer diagnosis. After my lumpectomy, we found out that 1 lymph node had metastasis which bumped me to stage 2b.

Then I went on remission as I was on hormone therapy and kept living life with so much zest. But on my routine scan 1.5 years later, we found out that I had new lesions on my hip bones so we had to switch treatments. So I was again, bumped up to stage 4 and my cancer is now considered metastatic. It was the lowest point in my life. I thought with all my heart that I beat cancer already so for it to come back was just a major let down. But with tons of support from my medical team, good friends and kind strangers, I kept on with life. My hip bone lesions stayed stable and I was able to find reasons to smile again.

But in 2020, I experienced recurrences again. This time, in my left lung pleura and my pericardial area. So my medical team had to switch my treatment again, install a catheter on my left lung so that I can drain the liquid that builds up in there and place a pericardial window so that liquid will have an outlet and not build up around my heart. I was going in and out of the hospital and had 3 major surgeries all while the global pandemic was going on!

While all this is happening, I wrote my first self-published self-help book, “That Sh*t Called Cancer” thinking that this could be my last legacy. I really thought I was on my final days/months so that propelled me to write a book that shares my cancer story and useful, practical psychological tips that survivors might learn from. And thank God, I’m still here alive to promote the book and write a second one.

As of now, I’m still on active treatment to stop the cancer from metastasizing. It hasn’t been an easy journey and there are days when I want to just give up or wonder about my mortality. But at the same time, I always find reasons to keep winning and keep living life. Having this diagnosis has taught me how to truly live day by day, be in a constant state of gratitude, and nurturing quality connections with the people in my corner. And as long as I’m breathing, I’ll continue to keep inspiring people, especially cancer survivors to keep thriving in life whatever that means to them.